The OCEANEF® equipment is aimed at the production of sodium hypochlorite (also referred as Bleach or Javel) through the electrolysis of an electrolyte which is a sodium chloride solution.

The equipment is essentially constituted of an electrolyser without separator, including titanium anodes called DSA (Dimensionally Stable Anode), covered with ceramics of precious metal oxides, playing the role of a catalyst in order to facilitate the chlorine evolution and not the oxygen formation.
Under the electrical current effect, the following reactions take place on electrodes:

If the anodes were not covered with the catalyst, there would’nt be any release of chlorine gas, but instead the following anodic reaction would take place:

In fact, if the concentration of chloride in the electrolyte diminishes too much, the oxygen amount increases. This is the reason why the chloride content in the electrolyte is controlled carefully.
OCl-, the hypochlorite ion, is produced at the desired concentration of 6,5 g/l of chlorine equivalent, depending on  the intensity and the duration of the electrolysis.
The preparation obtained in the OCEANEF® is a little alkaline, nearly neutral, it is composed of sodium hypochlorite and of hypochlorous acid, while bleach solution is alkaline and contains mostly sodium hypochlorite.
There are several models of OCEANEF® equipment to produce the necessary quantity of the preparation called OCEANE solute. 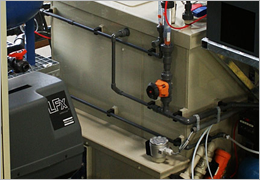